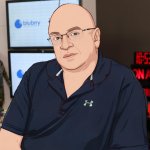 Todd Cochrane, CEO of Blubrry Podcasting, wrote the book on podcasting. Well, at least the first one: “Podcasting: The Do-It-Yourself Guide.” The founder of the People’s Choice Podcast Awards and the Tech Podcast Network, he’s also credited with introducing the first advertisers into podcasting, GoDaddy. Cochrane was inducted into the inaugural class of the Podcast Hall of Fame in 2015. But perhaps his biggest influence on podcasting is Blubrry Podcasting and its parent company RawVoice, which is a full-service podcast hosting service, with the No. 1 podcasting plugin for WordPress, and much more. A United States Navy Veteran who served 25 years and retired with the rank of Senior Chief Petty Officer, Cochrane resides in Quincy, Michigan

Rob Greenlee is a well-known 18+ year evangelist of the podcasting industry, current board member, former Chairperson of The Podcast Academy (ThePodcastAcademy.com), and Podcast Hall of Fame Inductee (PodcastHOF.com) in 2017.  His long career is currently and he has been responsible and continues to assist content providers of all sizes, technology, distribution, and monetization partner relationships who entrust their content to his very experienced guide.

Rob’s long and storied history on nationally syndicated terrestrial broadcast radio starting in 1999, then webcast and podcast. WebTalk World Radio Show was heard on XM satellite radio and is recognized as the first broadcast radio program in the world to begin podcasting on Sept 15th, 2004. To hear archived audio shows from 1999 thru 2006.

He has continued working to advance the podcasting medium in these previous positions:

A few years ago, he stopped publishing his three-year-old 186-episode podcast series, Spreaker Live Show on Spreaker.  He is also the former founder and lead host of WebTalk World Radio Show and Zune Insider podcast.  Follow me at RobGreenlee.com

About the New Media Show

The New Media Show officially launched in 2013 and was a spin-off of The Saturday Morning Tech Show. Rob Greenlee and Todd Cochrane found themselves talking more about New Media than Tech and decided to re-brand the show. Since early 2013, Todd and Rob have interviewed luminaries in the New Media and Podcasting space. If you wish to appear on the show please contact Rob Greenlee at rob at newmediashow.com to be scheduled for an appearance.

This site uses Akismet to reduce spam. Learn how your comment data is processed.